MWA 1st Quarter Market Update – The Only Certainty is Change

Happy Easter!   I hope you had a good holiday with your family.  We did.  Alli, my oldest, is in Wyoming playing soccer, recently hurt her Achilles tendon and was able to fly home for the weekend, so we had a nice family get-together with everyone home. Tyler, my middle child is a senior who just decided that she is headed to Texas A&M for college, Whoop!  It seems like just a few months ago they were running around my knee.  I’m sure you have heard the saying, “The days go slow, but the years go fast.”  Somebody sure got that right, as time has flown by.

As kids teach us, I think the only certainty in life is that no matter how much we may try to resist it, things will change, evolve, and grow.  As we apply this lesson to life, we study the past because history, like nature cycles and repeats itself over and over, the cycles may vary slightly, but it rhymes.

Section II: Comments on our Portfolio Shits over the Last 6 Months

In MWA’s 1st Quarter Market Review (link) slide deck: You’ll notice that ALL Equity, Real Estate Markets AND Bonds were down. Returns since last year have been mostly up and down, with not much growth since then in most markets. 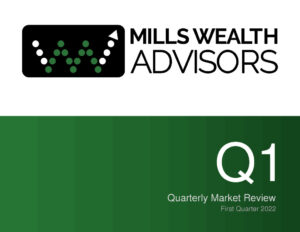 Section II: Comments on our Portfolio Shifts over The Last 6 Months

In markets, there have been a lot of changes in pricing over the previous 6 months as the narrative has now violently cycled from worries about deflation to worries about inflation.  A few quarters ago, I wrote that we felt future outcomes appeared to be bifurcated from the effects of MMT (Modern Monetary Theory), where the Treasury prints money with its printing presses and the Fed buys debt to hold on its balance sheet.  We felt that we needed to position the portfolios to work under a higher interest rate scenario in case some inflation showed up resulting from the Fed’s MMT policy response to COVID.  Conversely, we felt we needed to keep risk assets in the portfolio, as well, in case MMT led to asset price inflation (melt-up in valuations) resulting from additional money printing policies.  I’m still not completely sure which outcome will ultimately win out, maybe both, at different times, but in the short run, it is inflation.

In hindsight, I always wish I had done it a little differently, but overall, we are pleased with the decisions we made coming out of COVID, and we are happy with our decisions to remove some risk from portfolios about 6 months ago near market highs.  The decline in prices resulting from rising interest rates appears obvious now, and I wish I had done even more than I did, but we are not market timers, over time that has been a difficult way to consistently earn attractive returns on capital.

Our move to change our defensive playbook to have shorter bond lengths and a lower weighting to bonds, in general, has worked better than just a portfolio of stocks and bonds.  With the prospects for higher interest rates, we opted to choose to embrace wider diversification by removing some of our bond fund allocation and adding those funds to a long/short fund that attempts to profit from selling expensive assets and buying cheaper assets (with the sales proceeds).  Once those markets fall it buys back the assets it sold hopefully when they are less expensive.  In a flat or declining market, this strategy can provide defense when risk assets sell off adding another form of defense.  As mentioned in past letters we also continue to hold a sliver of bitcoin exposure (unless you opted out of that position). Both of these positions have helped portfolios and or haven’t hurt the portfolio…so far, as both bonds and stocks are down since adding these positions. (Oddly enough stocks and bonds declining at the same time have only happened a few times in modern history which is why we like to own both, stocks for offense and bonds for defense).  The real winner over the last 6 months has been commodities.

As we look forward and attempt to determine, what is the best way to help our clients reach their goals, we think caution is warranted.  Today’s profits are at all-time highs and will likely begin to revert toward the mean as many factors may begin to weigh on future profits. While markets have corrected some, markets have not exhibited fear-based selling often seen in bigger market corrections. Below are a few of the factors we think may weigh on profits: 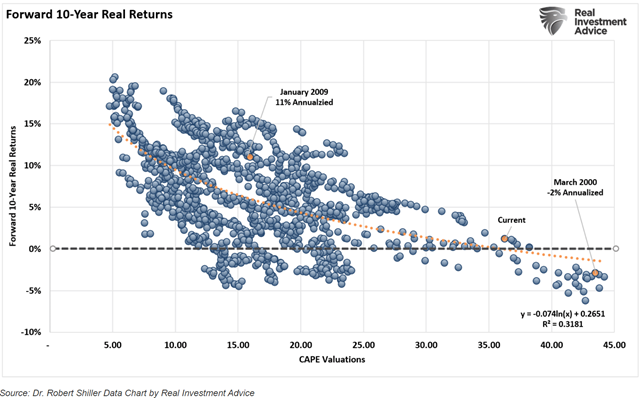 The yield curve is just inverted which means that short-term rates offer higher returns to investors than long-term rates (normally investors demand more interest the longer they tie up funds because there are more risks and unknowns over 10 years than over 2 years.  Historically, when inversions occurred for over 6 months, recessions have often followed. 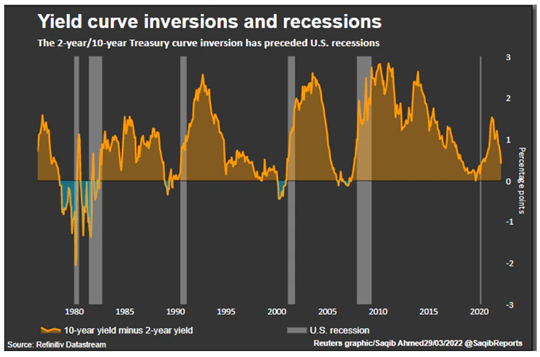 “U.S. home prices are up about 20% from a year ago, as measured by the S&P/Case-Shiller Home Price Index. The median cost of a single-family home is now north of $400,000 for the first time. The Wall Street Journal reports that homeowners earned more from their residences than their jobs last year. (5)

“Used vehicle prices have also continued to climb as the ongoing semiconductor chip shortage slows the production of new cars and trucks. In February, preowned vehicle prices rose 41% compared to the same month last year, according to the Bureau of Labor Statistics.”  (1)

I thought this quote from Jeremy Grantham a well-respected money manager I follow rings true, “The simple fact, often ignored, is that all key commodities required by the modern economy are finite in supply, and the cheapest and best have gone first.”  (1)  As more demand globally is placed on producing a greater supply of commodities the incremental cost increases.  This is easiest to see in the oil/gas industry as it takes a higher cost to be able to produce oil sands or shale.  These deposits were not the 1st to develop because of their greater cost to be able to produce the same amount of output as compared to Spindletop in East Texas in the early 1900s when they just stuck an oil derrick in the ground and crude shot out of the earth like the air rushing out of a balloon.

Speaking of reading, I just finished an interesting book by legendary investor Ray Dalio.  He is the founder of Bridgewater the largest hedge fund company in the US.  He and his team researched all the reserve currencies (like the dollar) over the last 500 years, and when you zoom out and view from a wide angle, the results are as you might expect: similar.  All the prior reserve currencies in the periods studied before the United States went through a similar evolution that eventually led them to money printing to finance spending (because the rest of the world wanted the paper money/debt).  When viewed from afar the cycles, policies and patterns appeared eerily like today.  The only problem with this history lesson is it is not tradeable.  The outcomes from the similar policies found in the past could unfold over years or decades, but I think the major lesson was clear: GET YOUR FISCAL HOUSE IN ORDER.  The best way for a person, family, or nation to succeed in the future is to be Financially Strong. We may be worried about Russia today because they are in the news because of the Ukraine conflict, but China is going to be our equal, not Russia.  Dalio devotes a decent portion of the book to Chinese history and thought processes.  China is playing the long game. They have well over 1,000 years of written history, so they tend to think a little longer than American political leaders.  The Chinese have been consolidating their power and saving money diligently for several decades, and at some point, the US and China will collide.  The Chinese view Taiwan, like Hong Kong, as their property that was taken from them.  You can already see that at some point, the Chinese will probably want it back.  (2)

Dalio points to Confucianism and Sun Tsu and points out the best way to win a war is to appear so strong, that merely displaying your power is enough to convince your advisories to back down because wars are almost always worse than can be imagined and are a lose-lose outcome. (2)

In American politics, we are very divided by historical standards, and this is a cause for concern that should be monitored closely.

In prior reserve currencies studied, the political instability that resulted from money printing was a common reason nation failed or were overthrown.  They crumbled from the inside because of poor fiscal policies.  Eventually, a government would decide that money printing was the easiest solution, but the unforeseen consequences were the inevitable widening of the gap between rich and poor that grows when countries resort to this tactic.  Money printing was often the root cause that led to political division because when assets rise in value, and this makes commodities like food cost more.  Since the poor don’t have a lot of assets, inflation from money printing makes obtaining assets (like a house) farther out of reach.  Whenever inflation reaches food prices and the have-nots begin to starve, people light themselves on fire and revolutions can begin. (2)

The Russian attack on Ukraine is taking, “an already sensitive world, dealing with interest rates and inflation rising and with extremely high asset prices beginning to wobble, and makes everything even more unpredictable.” (1)  “A rare certainty though – already being seen – is that this war will increase the pressure on raw materials. We notice fuel the most, but food may be the most dangerous to global stability. The invasion has caused the price of wheat, corn, vegetable oil, and fertilizer to rise rapidly from a level that was already at a record, according to the UN FAO’s Food Price Index. And whenever commodity prices rise, incomes are squeezed while costs rise, destabilizing economies and even political systems.” (1)

In US dollars. MSCI data © MSCI 2022, all rights reserved. Indices are not available for direct investment. Their performance does not reflect the expenses associated with the management of an actual portfolio. Past performance is no guarantee of future results.

Sources:
Source 1:  Putin’s Invasion Reminds Us That We Live In A Finite World https://www.gmo.com/americas/research-library/putins-invasion-reminds-us-that-we-live-in-a-finite-world/

Source 4:  Elon Musk Sold His Houses, but He Won’t Be Selling His Bitcoin and Ethereum https://www.advisorperspectives.com/commentaries/2022/03/18/elon-musk-sold-his-houses-but-he-wont-be-selling-his-bitcoin-and-ethereum